Coronavirus Lessons and Questions for Advisors from Hard-Hit Seattle 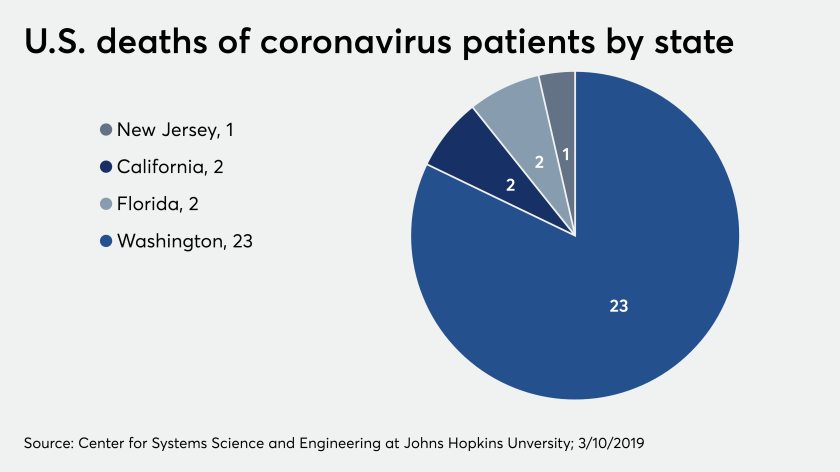 With one U.S. state suffering far more deaths in the coronavirus epidemic than any other so far, its financial advisors are facing canceled events, empty streets and client unease — a sampling of how the virus could soon impact practices nationwide.

“We don’t have any confirmed cases between our team or our clients, but the fear within the city is very real,” says Seattle-based advisor Wesley Burns of Burns, Toussaint & Associates.

At least 23 of the 28 U.S. patients who have died after being diagnosed with COVID-19 were from Washington, according to the latest numbers on reported cases tracked by the Center for Systems Science and Engineering at Johns Hopkins University.

Seattle-area advisors such as Burns and Michael Policar of HighTower Bellevue say there are telltale signs of a spreading epidemic, such as barren downtown streets and people wearing masks and gloves. FPA’s Puget Sound chapter is also monitoring coronavirus closely with respect to its annual symposium later this month.

Advisor practices are enabling remote work and reminding clients to stay the course in their portfolios amid wider economic turmoil stemming from the virus and an oil price war.

Policar — who recorded an episode of his “Fifteen Minute Financial Advisor” podcast in self-imposed isolation at home while recovering from cold-like symptoms — says clients are asking how long he thinks the outbreak could last and when they should buy the dip.

“My answer is the same for everyone: I have no idea, I’m not a doctor and even if I was one I don't think I’d know,” he says. “We're just going to keep your portfolio the way we had it planned a long time ago, and we'll rebalance as we have to rebalance.”

The 523 cases between Washington, California and New York represented 65% of the roughly 800 reported diagnoses across the country, as of March 10. There were 19 deaths linked to just one nursing home in the Seattle suburb of Kirkland, according to local news reports.

After Gov. Jay Inslee declared a state of emergency on Feb. 29, the Washington State Department of Financial Institutions is asking firms to notify the regulator of any branch closures and providing guidance on how to hold virtual annual meetings.

The virus is also affecting public events in the area, as it is in other parts of the country. HighTower cancelled an executive services showcase this week in New Orleans that Policar planned to go to as part of 100 expected attendees who were to discuss the firm's business services.

HighTower decided not to hold the event "so as to keep everyone safe and healthy," Chief Marketing Officer Abby Salameh said in an email. Salameh says the firm is closely watching the situation as it plans for its largest annual meeting scheduled in Nashville next month.

The 400-member FPA of Puget Sound expects to go ahead with its symposium, but still has offered refunds, minus a $20 processing fee, to attendees who cancelled their registration by Feb. 14, the organization said last week. Other guests can send substitutes but won’t get refunds.

“Attendees can expect to see heightened levels of cleanliness and onsite accommodations to actively encourage all conference participants to take common-sense precautions following CDC guidelines when they are onsite at the event,” the FPA chapter said in a March 5 update.

When contacted about how coronavirus is affecting practices in the area and to check if there were any updates on the status of the symposium, three board members of the chapter declined interview requests.

One of the largest wealth management firms in the area, Advisor Group’s KMS Financial Services, also declined to discuss coronavirus.

The topic clearly isn’t at the top of the list any advisor or firm would like to be addressing, given the disturbing potential for an exponential rise in cases and the substantial regulatory obligations relating to business continuity plans.

Out of 700 state-registered RIAs in the state, none have notified its security regulator of any plans to close offices temporarily, according to Director of Credit Unions Amy Hunter. Only one state-chartered credit union, two institutions with federal charters, one mortgage brokerage and one consumer loan company have alerted the regulator to closures.

In addition to the agency’s guidance enabling mortgage loan originators to work from home, Hunter sent a message to credit unions last week explaining how to conduct virtual versions of their required annual meetings. Closure and remote work at state-supervised firms “would really be a business decision for them to make” rather than mandatory, Hunter says.

“Everyone is just being more cautious about that,” she says, inviting RIAs and other financial services firms to get in touch and make use of resources on the agency’s website. “Each business may have a different question that they need to know the answer to.”

Stubel also provided a Feb. 27 blog post that the firm sent to all clients about how to respond to market volatility. Burns’ team emailed clients and placed calls last week as well, to reassure them that their portfolios are “built to withstand market fluctuations such as this,” he says.

“The most important piece of advice I would give is to be proactive in your communication. Too often, advisors are reactive in their communication, and they will risk losing that relationship they’ve built,” Burns said. “This is particularly important in dealing with retired clients who are spending down their portfolios — they need to know that they won’t run out.”

Another challenge of operating during an outbreak is losing focus on attracting new clients. However, the ability to lead clients through a rocky time can open up a lot of growth opportunities, Burns says.

The majority of Policar’s clients work in big box retail, which he says has seen a “massive increase in business” in delivery orders since the outbreak started. He knows people who are in quarantines, and he has a friend who manages a senior living facility. Policar says advisors should plan to operate under quarantine now, rather than on the fly.

“One of the most important things to do would be to make sure that you have full access to everything for your team,” he says. “Make sure you have the supplies you need to be able to essentially hunker down and ride out the storm…. The same advice we're giving to clients applies to us: Prepare, don't panic.”

For Burns, the biggest evidence of the outbreak has shown up in school closures and local businesses with few customers in them. He says coronavirus is hurting restaurants and event spaces while forcing parents to balance work with child care throughout the day.

“This might be the craziest part of all. On my walk in [to the office] this morning, the streets of Seattle were empty,” Burns says. “For Seattle to be without traffic is unheard of.”